In the fall of 1888 "Jake" ZumBrunnen came from Red Oak, Iowa, to Harrison for the purpose of filing on land and making a home in the West.

Many times one wonders how people from a far distance happen to locate in a certain place. In this case it was because Tom Williams of Harrison was a brother-in-law of Jake ZumBrunnen, and having lived here for a few years, had written to his sister persuading them to also come west.

In looking over the country for a place that looked good he came over into Wyoming and decided "This is the place." He went to the land Office at Douglas and filed on the land. After leaving an order with O. E. Garten, who operated a sawmill in the pine timberland north of Harrison to saw out enough lumber for a house, he returned to Red Oak.

In March 1889 he moved his family consisting of his wife, Ida J. Williams ZumBrunnen, and three sons, Lee, Roy, and Tom, into their new home in a very new community. They were the first or one of the very first settlers. The settlement was named Pleasant Ridge and is still so called by many of the old pioneers, but it was named Kirtley. Wyoming was still a territory and this was Laramie County.

Mr. ZumBrunnen rented his place for a year and took his motherless children to Monroe, Wis. The four younger ones were cared for by his parents and the two older boys, Lee and Roy, each lived with an uncle on Wisconsin farms. The father worked by the month on a farm.

In January 1897 they journeyed again to Wyoming, Mr. ZumBrunnen having married Eva Whipple. With her son, Ray, and the six ZumBrunnen children they again took up residence in their home on Pleasant Ridge. Two more children, Edna and Walter, completed the family circle and the children grew to manhood and womanhood and are all still living except Lee. He was grown and married, and an engineer on the B. & M. Railroad, and was killed in a railroad accident near Sheridan at which place he lived. Eva ZumBrunnen died in April 1934 and Jake ZumBrunnen in December 1940.

Since the death of the parents the children have kept up a "round robin letter." Nearly a year ago mention began to be made of a family reunion and the date was set for August 15, 1954 at Lusk.

All of the children were present with a good representation of their grandchildren and the number registered in the guest book was 83.

Ray Whipple has not married. He lives in San Francisco, Calif. Mabelle Ballard, who was Lee's wife, was present with her husband, P. A. Ballard from Hot Springs. Tom and Veda ZumBrunnen from Salisbury, N. C., Walter and Flossie from Louisburg, Kan., Roy and Bama from Kirtley, Stanley and Ethel from Lander, were present. The three girls have been widowed in the order named: Del J. Bigelow, husband of Dorcas (Dot) died August 5, 1951. She now lives in Scottsbluff. James W. Christian, husband of Nell of Lusk, died October 12, 1952, and Tomas E. Ammons, Edna's husband, died August 3, 1953. Edna makes her home in Denver.

The picnic dinner and supper was held on the lawn at the home of Nell C. Christian. The day was spent playing horse shoes. A musical program was enjoyed in mid-afternoon. Tom showed movies that he had taken at the reunion which was held here eight years ago. Len Christian and daughter, Mrs. Ted Lohr, and son, Mark, Ray and Andrew Christian, joined the party in the evening.

The brothers and sisters were in Lusk for several days, and to say that the bunch had a good time is putting it too mildly. They talked and talked. They looked at old pictures, they looked at new ones of the family which were unable to be present. Old incidents were recalled and many a good laugh enjoyed. Also there were sad ones with tears not far away. They gathered around the piano and played and sang the old hymns that they had sung in church and Sunday School from the "Finest of the Wheat Song Book."

They drove over the old roads pointing out different places. "That was the old so and so place.", "so and so lived over there". They drove up the old S Bar Hill road, by the old Kirtley place, the first post office. Ray recalled, as they paused there, the many cold rides he had had carrying the mail on horse back with saddle bags if the mail was heavy. Three times a week, about 23 miles over the unmarked prairie, through cold and blizzards the mail was taken. No wonder he remarked that it was "California for him for the remainder of his days."

They noticed that many of the old buffalo wallows where they had waded, hunting for tadpoles, were nearly filled up level with the surrounding land. They drank together from the old well. They marked the site of the old school house, the first one built in the community.

Recently in pouring through some of the old Lusk Herald files we noted where J. J. ZumBrunnen had come to Lusk to find a school teacher, that the new shcool house was finished and ready for school, and dated October, 1892. School and Sunday School were held previous to the building of the school house, in a little log building on Amy Christian's place.

This first school house burned down about 1898 or 1899. Going on past that site a quarter of a mile east they visited the Pleasant Ridge Cemetery where lie the parents and many old friends and neighbors.

They also greatly enjoyed visiting with old friends and neighbors on the streets and calling on some of them in their homes and places of business.

While visiting at Roy's home it was mentioned that it was one the site of the "Grandma Sutton" place, and that her house had burned down. That was quite an event in our young lives, said one of the boys. It was in mid January, a bitter cold night. Dad had gotten up to put another chunk of wood in the old Round Oak heater, and saw the flames rising high a half mile east. He called the older boys and they went to the fire.

There were 79 members of the family present at the reunion. Fifty-three were unable to be present. There have been seventeen deaths in the family since Jake ZumBrunnen and Ida Williams Marriage in 1882.

There were no war casualties, altho 17 served their county in three wars: World War I, World War II and the Korean War.

And so comes to the close the musings on a a very happy occasion. 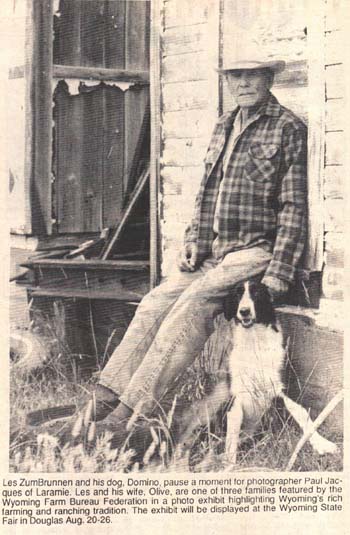 The striking pictorial exhibit, on display at the Wyoming State Fair in Douglas Aug. 20-26, is a collection of photos and stories featuring Farm Bureau families that have farmed and ranched for decades.

The ZumBrunnen family has been ranching in Niobrara County for more than 100 years. The property homesteaded by Les's grandfather in 1885 is owned and operated by Les and Olive's son Mel and his wife Lola.

According to Farm Bureau Executive Vice President Larry Bourret, the photo exhibit commemorates the history witnessed by long-time farmers and ranchers like the ZumBrunnens. "We are celebrating the state's Centennial as well as the history of Farm Bureau and agriculture in Wyoming," said Bourret.

Internationally award-winning photographer, Paul Jacques of Jacques Photography in Laramie was the photographer for the project. The photos, some of which include poster-size portraits of the featured families, reveal the natural textures and artistry of Wyoming's family farms and ranches.

"We want to provide a glimpse of the lifestyle and the wealth of knowledge our older members have to share. These are certainly not the only people with stories to tell, but they represent several generations of agriculture in Wyoming," Information Officer, Candance Boroff, said.

Scott Whitman, assistant information officer and co-director for the project agrees. "These people are among many in the state who have seen things come and go. They've survived severe drought and harsh winters. They've experienced the extent of Wyoming's depression and prosperity."

The ZumBrunnens have a long record of active membership and service in Niobrara County and the Lusk community. Les served 10 years as a Niobrara County representative in the Wyoming state legislature, and was a long-time member of the school board. Both Les and Olive served as leaders in the Niobrara County 4-H program for over 35 years.

Mel and Lola ZumBrunnen of Lusk have four children: Les, Teri, Clinton, and Jason. Les and Olive's daughter, Kathy McDaniel, and her husband Larry live in Denver. They have two daughters; Mardee and Julie. The newest member of the family is Meagan, the daughter of Mardee and Michael "Mad Dog" Aanonsen of Laramie.

Other long-time Farm Bureau members featured in the exhibit include Don and Dorothy Kortes of Carbon County and Mildred Miller of Miller Land and Livestock in Sublette County.

The Farm Bureau exhibit will be displayed "on the hill" in the commercial building at the Wyoming State Fair grounds in Douglas Aug. 20 through 26.