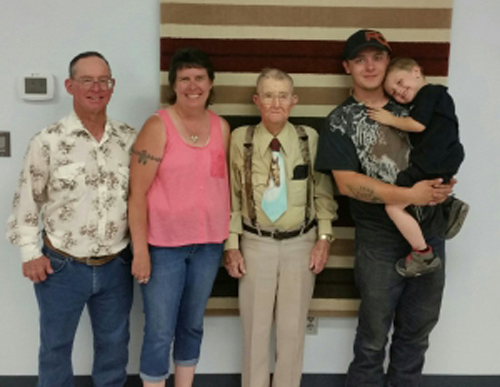 Patriarch Larry Eddy poses for this 5 generation photo. Mr Eddy just celebrated
his 100th Birthday. Family came from as far away as Arizona, Minnesota and
Washington State to celebrate his century of life.

A wonderful gathering of family and friends greeted Larry Eddy, longtime resident of the Keeline ranching area, to help him celebrate his 100th birthday. Family came from as far away as Arizona, Minnesota and Washington State as well as many from Niobrara County to join him for his special day. He greeted all with a clear eye of recognition, while leaning on a cane, due to recent bad decision to help lift a heavy appliance.

Daughter Lois Mall and her daughter, Ann Wood, both of Cheyenne, hosted the reception, which was held June 20 in the afternoon in the dining hall of the Niobrara County Fairgrounds. Fresh fruit accompanied the beautiful cakes baked by Joyce Hammer and Samantha Eddy, which were served to the guests. A display included stories of his life and pictures of Larry Eddy and his late wife, Arlene, and other family members. Excerpts from his life account follow:

Larry Eddy, born to Joseph Clayton Eddy and Charolette Cora Coleman Eddy, grew up on his parents'' homestead northwest of Keeline. He attended grade school by riding horseback, and had to walk and lead his horse if he dropped the reins or got off. He rode in a car, a neighbor's Model T Ford, for the first time in his early teen years. Eddy met his wife at a dance in Shawnee and courted her by riding his horse through 17 gates on horseback to her home, an hour and half ride one-way. The couple were married June 12, 1938 in Hot Springs, S.D., with Lloyd and Isabel Coleman as witnesses. They lived on a place where they had to haul water for seven years, until Eddy purchased the Cox place that had a hand pump in the kitchen. He still lives there. The couple had three children, Lois, Dona (now deceased) and Ivan. He has four grandchildren, 11 great-grandchildren and five great-great-grandchildren.