Gene Lewis Bauer, 37, and his 14-year-old daughter Lorna were killed instantly Sunday afternoon when a light plane piloted by Bauer crashed approximately 300 yards northeast of the runway at the Lusk Airport. 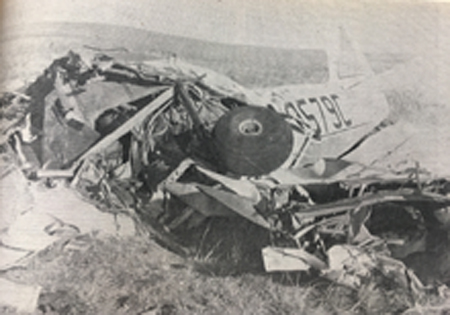 The accident is still under investigation by the National Transportation Safety Board (NTSB) and Federal Aviation Administration. Wilbur E. Parker, air safety investigator for NTSB said, "At this point all we can release is factual evidence." and referred The Herald to Mr. and Mrs. Jim Staudenmaier, ranchers near Harrison, who witnessed the crash.

Staudenmaiers were out for a Sunday drive, and Mrs. Staudenmaier told the Herald, "We were just leaving Lusk traveling east and noted an airplane circle the east end of the runway, it then disappeared. We next sighted it at the west end of the runway. It flew east the entire length of the runway approximately ten feel high and then began to gain altitude and appeared about ready to level off when suddenly it just nosed to the ground."

The Staudenmaiers returned to the airport and reported the accident to officials. "My husband walked over the the scene after the highway patrol and ambulance had arrived," she said.

Mr. Parker said the pilot was operating the plane on a student license only, and according to Mr. Bauer had taken off from the Lusk Airport about fifteen minutes prior to the accident. "He should not have been flying with a passenger on a student license," he commented.

The 1953 Piper PA 18 was last registered to Russell Ceburski, Malta, Mont., and "we (the NTSB) assume Mr. Bauer was in the process of buying it," said Parker.

Mr. Bauer was hired by the Lusk Town Council last March as manager of the airport, and at that time started operating Gene's Flying Service. Mrs. Bauer and their four children, Lorna, Larry 10, Lynn 8 and Lee 4 joined him here when school was out.

The family came from Montevideo, Minn., and Bauer, a truck driver for 23 years, then told the Herald, "I have always been around an airport, and for many years wanted one. Hopefully, I can build up a good business here."

In June Bauers hosted a grand opening and air show at the airport. Aerial acrobatic feats were performed by Bill McKenna of Torrington who just last week was hired by Bauer as flight instructor. Plans were for McKenna to come to Lusk three days a week.

Bauer was in the process of purchasing another aircraft because several weeks ago his Piper colt was totaled when it was blown over by the wind. At the time the plane was destroyed Bauer had flown to the Bruce Damrow ranch and was in the house visiting.

Funeral service for Mr. Bauer and Lorna was being held in Montevideo this Wednesday afternoon at 1:00. Al Titchener, Lusk town clerk, and Ken Keller were to be pallbearers.

Sheriff Harold Rogers who went on the ambulance call to the airport said he was certain that both bodies were pinned in, and the plane had to be cut apart to remove them. The watch Mr. Bauer was wearing stopped at 3:35.

Personnel of the Town Maintenance crew are temporarily policing the airport.