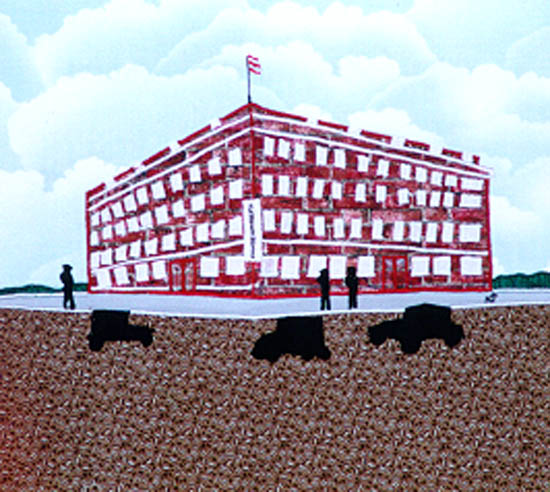 The Ranger Hotel was recreated as a quilt square by The Bag Ladies for their Historic Quilt in 2001. 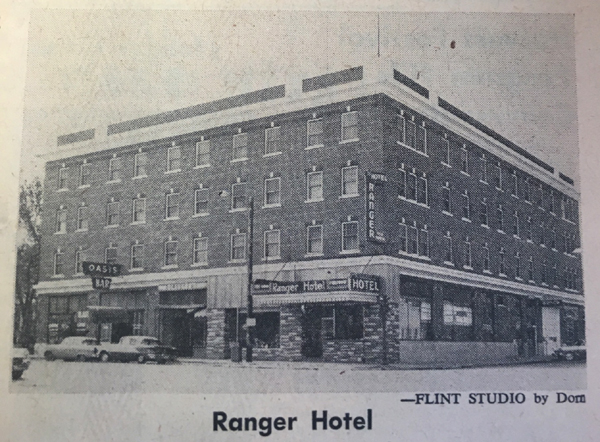 The Ranger Hotel was constructed in 1919 and 1920 during the oil boom. It was not opened until April of 1928. Meanwhile it had been purchased under tax title by the Hendrie interests of Denver and it was that firm which completed the first two floors and put it into operation.

The importance of the hotel opening to Lusk is revealed in news stories in the files of The Lusk Herald. "It was a gala day in the history of Lusk," said The Herald. Governor Frank C. Emmerson flew from Washington, D.C. to speak at the opening and his address and the ceremonies were carried over Radio Station KOA at Denver. Over 500 people attended the event with civic and commercial delegations being present from Nebraska, South Dakota and Wyoming.

Mr. Roy Chamberlain purchased the Ranger Hotel in 1936 from the Hendrie estate interests of Denver, and furnishing from the managers, Mr. and Mrs. Fred Runge. At that time only the ground floor and second floor with 40 rooms were completed. In the summer of 1937 Chamberlain started in small projects to complete the third floor. Then in 1952, the top floor was completed and the elevator installed.

From 1938 to 1942 the Ranger Coffee Shop, noted throughout a wide area for its fine food, was operated by Chamberlains.

Then in the summer of 1957, there was an extensive project that included remodeling and modernizing the lobby and rearranging the garage to provide drive-in hotel facilities for all kinds of weather.

In 1957, the Chamberlains sold the Ranger to the Hidalgo Oil & Gas Co. of McAllen, Texas. In 1976, Hildalgo sold it to Panos-Duel Investments of Casper. It was remodeled into low-income spartments, with several business rental spaces on the first floor.