A Letter from One of the First Teachers of the Lusk Schools
Berkeley, California,
2700 Fulton Street,
March 11, 1929

To the Senior Class of Lusk High School, Lusk, Wyoming.

The first teacher of the Lusk public school was Mrs. Margaret J. Goodwin, who had eighteen pupils enrolled. That was in 1887.

School work was hampered by scarcity of public money, as no report had been sent in by the clerk of the Board of Education - hence the shortage. There was only money to pay for a three-months' term, which closed December 23rd.

I arrived in Lusk the 21st day of December and opened a pay school the first Monday in January - that was open to every one in the district whether they could pay or not - so that is the way the first school year was finished. The School Board co-operated by cleaning the schoolhouse for the opening, and also gave rent and fuel free.

After the school election I was engaged to teach for the coming year - nine months.

The school-house was a small frame building, formerly used as a boarding house by Louise Eng (Mrs. John Giinther, in later years), and Lena Larson (Mrs. Lena Henry). There was a wooden partition across the center that separated the school and cloak room on one side from the well-filled room of stove-wood on the other. The room was well built and warm except that the north door let the howling blizzards in. It stood in the extreme northeast corner of what is now the D. E. Goddard residence lot at Main and Third streets. There was no sidewalk on either side.

New settlers had come to Lusk since the previous year and some small children had attained school age, so we had 45 names on the register. It is forty-one years ago, but some of them are your friends. Would their names interest you? Here they are - from memory:

Miss Lute LePage taught in 1889. The new schoolhouse on the hill was occupied in 1890. The teacher was a graduate of Oxford University. If I remember right, his name was George Osborn.

We had two teachers for the first time in 1892. They were Mrs. Rector and her sister, Miss Gillespie.

I hope this may be of some little help to you. I thank you for remembering and calling on me. 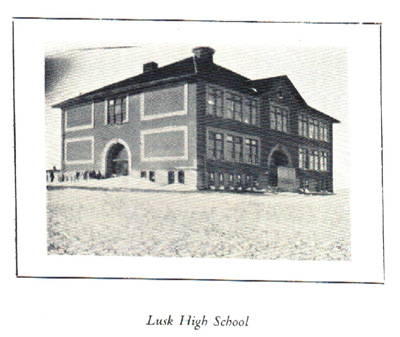 In 1910 the present High School building was erected.

Only the main floor and the present eighth grade room, which was then the High School auditorium, was completed at this time. There were two grades in each room. Only a two-year course was offered. The first superintendent was Mr. Miller, who was assisted in the High School work by Miss Christian.

The first class that graduated from Lusk High was the class of 1912, composed of Florence Miller and Autumn Mayes. 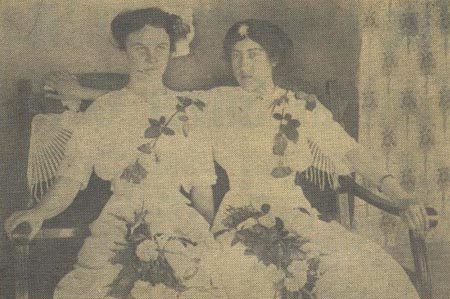 In 1913 courses in commercial studies were introduced. Then in 1914 Lusk High was made a four-year accredited high school. The superintendent at this time was Mr. Roland. A vocational agriculture course was added in 1926. The year 1916 was the first year of basketball at Lusk High. Coach Hartwell introduced football in 1922. Now (1929) Lusk High is to have a track team. The coach will be Mr. Blodgett, who also coached football this year.

And now as Lusk High has grown so much, plans are being made for a much-needed High School building - separate from the grades.

It is the plan of the Board of Education to secure a plot of ground sufficiently large to afford a good athletic field adjoining the school building. The new high school plant will have an up-to-date gymnasium, will be modern in every particular, and so constructed that additions may be made as the needs of the district demand.

We congratulate the people of the district on their progressive spirit, and their response to the demands of modern education. While the class of 1929 cannot be with you to enjoy the new high school, we are glad indeed that those to come after us will be afforded better educational opportunities through the use of more modern facilities. 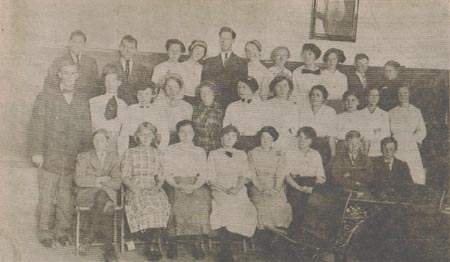 With married names added, where obtainable, pictured, l to r, are:

Members of the school, not pictured, were: Nat Baker, Robert Gamble, Lionel Bell, Ray Christian, Lola Mathews. The photo was enlarged from a small original to its printed size by Dave Hamaker, N.C.H.S. science teacher.